This Evolution 101 post is by MSU grad student Ali Tehrani

Darwinian evolution suggests that the pattern of changes in populations is driven by natural selection, i.e. those individuals that are more fit survive and reproduce. Does that mean populations of organisms are constantly gaining beneficial genes and losing detrimental genes through natural selection? So, is it not possible that some genes that are actually beneficial or at least neutral to the organism’s fitness have disappeared in evolutionary history only by chance? Or alternatively that random events could cause slightly deleterious genes to increase in frequency?

There are several examples in nature in which beneficial or neutral traits have disappeared from a population. Consider an island with a population of ten rabbits. This island can only hold a small population of rabbits (about 10) due to resource limits. Five rabbits out of ten are white and the other five are brown (figure 2). Also assume that the coat color does not have any effect on their reproductive success. Coat color is a genetically inherited trait with two different alleles1, one for white coat color and the other for brown. If both parents have the same coat color (i.e. both of them are white or both are brown), their offspring will also have that coat color (same as their parents). If one of the parents is white and the other is brown, their offspring will be either white or brown with equal probabilities (see figure 1). Rabbits in this population mate randomly; thus, the probability of mating two white rabbits is the same as the probability of mating between two brown rabbits. So, there is a fifty percent chance that each individual in the next generation will be white or brown. Does this mean that the population of rabbits will always have five white rabbits and five brown ones? 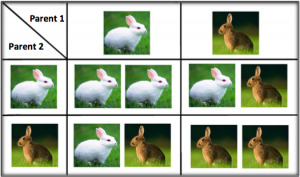 In reality, there is no guarantee that such system will always have five rabbits of each coat color. It is similar to flipping a coin ten times and getting different numbers from five heads and five tails. This phenomenon, which is called “sampling error”, results in fluctuations in number of rabbits with white/brown coat color. Sampling error is more likely to happen in small populations because in these populations, obviously, the sample size is smaller. The random fluctuations in allele frequency in a population which occurs due to sampling error is called “genetic drift”. The effect of genetic drift is stronger in small populations. Sampling error becomes smaller as the population size grows for the same reason that if we flip a coin one million times the deviation from 50%-50% becomes much smaller.

Let’s go back to our rabbit population. Given the initial population in figure 2, and the mating pattern illustrated in figure 1, each individual in the second generation would be brown or white with equal probability of 50%. So how many white rabbits would be in the second generation? Well, this is similar to ask: how many heads do we get if we flip a coin ten times? In reality, it is possible that we get any number of heads. So assume we flipped the coin ten times and we got six heads and four tails. 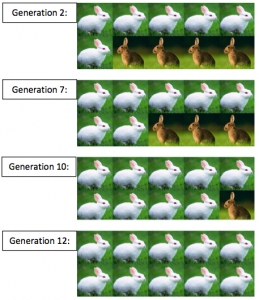 Figure 3. Fluctuations in the number of white/brown rabbits through generations. Genetic drift in this scenario led to fixation of white coat color allele in the population. 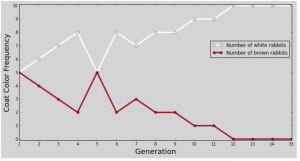